Well we were certainly very busy yesterday at pre-school!  Although our 'Sports Day' was affected by the inclement weather we still managed to raise £200 and then we had our Take That Tribute Evening which raised an amazing £720!

A big thank you to everyone involved with both events, especially to our brilliant band 'The Greatest' who gave a fantastic performance and to everyone who came along and joined in the fun.  Everyone at Springfield really appreciates the effort and involvement of so many people to raise so much money in one day.  Events like these ensure that we can continue to provide top quality care and education with the best resources possible - thank you!
Posted by Springfield Pre-School at 19:16 No comments:

Well i'ts all happening at pre-school this week - on Monday we took delivery of 10 eggs courtesy of 'The Happy Chick Company'! 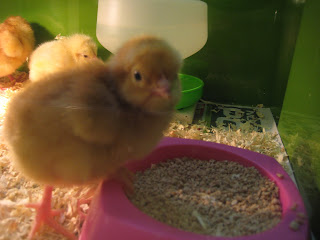 This Friday, 27th April, is our Take That Tribute Evening at Friesland School hall, Sandiacre from 7.30pm - 11.30pm.  It's all set to be a fantastic night with a DJ to kick the evening off followed by 'The Greatest', our tribute band who performed for us back in November 2010 when we raised over £700 for pre-school.  There will also be a very reasonably priced bar!!

Tickets are only £10 in advance (£12 on the door) so get yours quick, you don't want to miss out on a brilliant night as well as your chance to help raise funds for our pre-school.

Contact Jayne on 07960 983423 or springfieldpreschool@hotmail.co.uk for tickets or more details.

Thanks for all your support, we really appreciate it.
Posted by Springfield Pre-School at 18:29 No comments:

We have received information that the 'travellers' have moved off the car park as of Friday 13th April.

Therefore pre-school should be unaffected by them and re-open for the Summer Term as planned on Tuesday 17th April (Monday 16th April is an Inset Day).

Many thanks for your patience and understanding in this matter.
Posted by Springfield Pre-School at 10:13 No comments:

Some of you maybe aware that a group of 'travellers' have taken up residency in the council car park adjacent to pre-school.

The travellers moved into the car park on the evening of Sunday 1st April.  We then contacted the council on Monday 2nd April; who informed us that legal proceedings have been initiated to 'move on' the travellers but that this could 'take up to two weeks to forcibly move them on'.

The current situation is that we expect the 'travellers' to be 'moved on' by the end of Tuesday 17th April.

Pre-school is closed on Monday 16th April (Inset Day) and is due to re-open on Tuesday 17th April.  At the present time we still intend to re-open as planned on the Tuesday but should the situation change we will advise all parents via our text service.

Parents are advised to consider their parking arrangements when attending pre-school.

Any problems or questions please do not hesitate to get in contact, either via email on springfieldpreschool@hotmail.co.uk or telephone on 07960 983423.

Thank you for your patience and understanding in this matter,
Jayne & The Team
Posted by Springfield Pre-School at 16:18 No comments:

Well it's holiday time again and the weather is up to its usual tricks.....a lovely couple of weeks only to be brought back down to earth with traditional school holiday weather - wet and cold!!

We hope everyone is still enjoying their holidays and would like to wish you all a very Happy Easter!  We hope the Easter Bunny brings you lots of chocolate!!
Posted by Springfield Pre-School at 20:03 No comments:

Lunch Club
Only available to those children attending a full day
Early Drop-Off
Monday to Friday 8.45am - 9.15am

Fees are £4.75 per hour.
Invoices are issued per calendar month.
Funding for 2 year olds is available subject to certain criteria

Over 3 Years of Age
All 3 & 4 year olds are entitled to 15 hours of 'Universal Entitlement' per week.
A further 15 hours of 'Extended Entitlement' per week is available dependent on personal circumstances
Lunch Club
Parents to provide a packed lunch - only applies to children who attend a full day
Early Drop Off - 8.45am
£2.35 per day
Provision of Essential Supplies
To cover the costs of essential supplies for example; wipes, tissues, snack
50p per session per week - invoiced per half term
Please speak to our Early Years Manager for more information regarding our fees and accessing government funding.